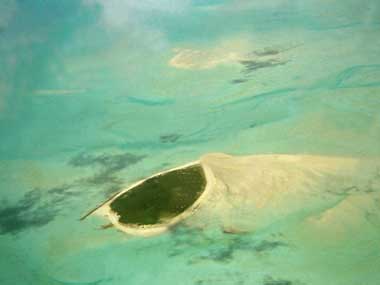 Ashmore Reef Commonwealth Marine Reserve (formerly Ashmore Reef National Nature Reserve) is located in the north-eastern Indian Ocean on the edge of Australia’s North West Shelf. The Reserve is in Australia’s External Territory of Ashmore and Cartier Islands and is under the jurisdiction of the Australian Government. It is the largest of only three emergent oceanic reefs present within the north-eastern Indian Ocean, and is the only oceanic reef in the region with vegetated islands. The Reserve is comprised of numerous marine habitats and supports a regionally important and diverse range of species. The Reserve has been recognised internationally for its high diversity and density of sea snakes. The Ramsar site is also home to Dugongs, highly diverse reef building corals, and numerous endemic species of fish and other marine invertebrate fauna. The three vegetated islands and several sand cays of the Reserve include important seabird and turtle nesting sites and support large populations of migratory shorebirds and breeding seabirds. Ashmore has been regularly visited and fished by Indonesians since the early eighteenth century. Indonesian artefacts identified in the Reserve include ceramics, graves, ballast rocks and what could be a trepang (sea cucumber) cooking site.Tourism and recreation as well as access to shelter and water for traditional fishers from Indonesia in the Reserves is mainly limited to West Island Lagoon and part of West Island. Research relevant to the Reserve and nearby reefs has included surveys, monitoring and/or research on terrestrial and marine non-indigenous species, sea birds, migratory shorebirds, sea snakes, fish, corals, sea cucumbers, trochus, clams, cephalopods and other marine invertebrates.