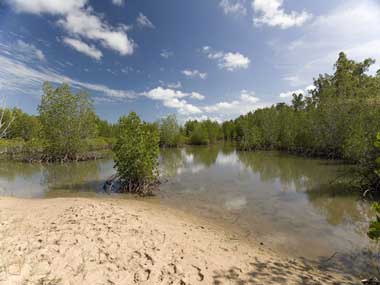 The Cobourg Peninsula is located 200 km north-east of Darwin in the Northern Territory. The Cobourg Peninsula Ramsar site boundary follows the former Gurig National Park boundary (now part of Garig Gunak Barlu National Park), and covers all wetlands of Cobourg Peninsula and nearby islands. This includes freshwater and extensive intertidal areas, but excludes subtidal areas. The peninsula is in a remote location and there has been minimal human impact on the site. The wetlands are mostly tidal and numerous creeks flow into the tidal areas. The northern coastline of the Peninsula has isolated bays, rocky headlands and beaches. The intertidal and coastal areas consist of extensive dunes, fringing coral and rocky reefs, sand and mudflats, with few areas of mangroves and seagrass communities. In contrast, the southern coastline and islands are dominated by mangrove communities associated with large mudflats. The main vegetation communities on the Peninsula are eucalypt forests and woodlands with grass understorey. There is also an unusually extensive area of tall palm on the Peninsula. An abundance of fauna use the wetlands including a large variety of birds, frogs, marine turtles, mammals and reptiles including the saltwater crocodile. The dugong lives in the marine area surrounding the Peninsula. The Ramsar site has significant social and cultural values, including archaeological material relating to its Indigenous, Maccassan and European heritage. These include occupation sites, traditional art, middens and waste heaps, abandoned settlements and houses, and shipwrecks. An on-going ‘living culture’ is maintained by the Arrarrkbi (traditional Indigenous owners of the Cobourg Peninsula) who uphold traditional land management practices, customary law and traditions. The Garig Gunak Barlu National Park is managed under a joint arrangement between the traditional owners and the Northern Territory Government. The Park is managed as a conservation reserve and is used for conservation, regulated tourism, hunting and Indigenous use. The waters surrounding the Peninsula support commercial and recreational fisheries.