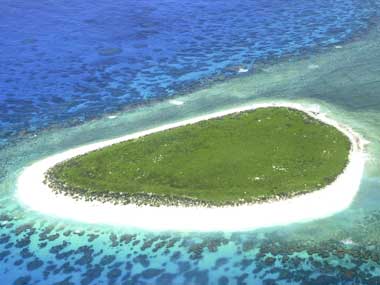 The Coral Sea Reserves Ramsar site lies in the central Coral Sea and is comprised of oceanic islet and reef habitats that are representative of the region. The site has two major components, Coringa-Herald National Nature Reserve and Lihou Reef National Nature Reserve. The two reserves are about 100 km apart and together they lie on the Coral Sea Plateau, which is separated from the Great Barrier Reef by an area of deep water known as the Queensland Trough. The marine habitats present in the shallower areas of both Reserves are front (windward) reef slopes, exposed reef crests/rims, reef flats, back (leeward) reef crests, back reef slopes, reef shoals, and inter-reef channels. The islets and cays of the site are composed of sand, rock and coral rubble, and each has a fringing coral reef. The islets are low (not exceeding 5 m above mean sea level) with limited freshwater bodies fed by direct overhead rainfall, and no upstream surface or groundwater sources. Some islets support freshwater sufficient for vegetation such as Pisonia forests, shrubs and/or other herbs and grasses, which in turn are important for roosting and nesting for birds. The Coral Sea Reserves are an important habitat for the nationally threatened Green Turtle and Hawksbill Turtle. Bird species such as the Eastern Reef Egret, Buff-banded Rail, Purple Swamphen and Wedge-tailed Shearwater are known to breed within the Ramsar site. The diverse marine life of the Ramsar site also differs from the nearby Great Barrier Reef with sponges being more abundant than coral. Many ships have been wrecked on Lihou Reef, and documented wrecks date from the 1890’s onward. The wreck of the Coringa Packet, lying off Chilcott Islet in the Coringa-Herald National Nature Reserve, is dated at 1845. Shipwrecks located within the Reserves are protected under the Historic Shipwrecks Act 1976 if they are more than 75 years old. The Coral Sea Reserves are currently used for nature conservation, scientific research, and recreational diving.