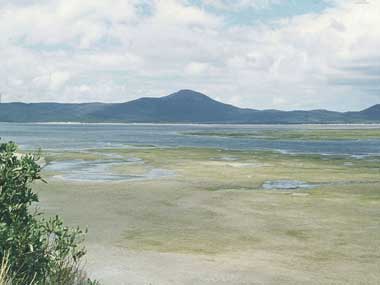 The Corner Inlet Ramsar site is located on the south-east coast of Victoria. It is bounded to the west and north by the South Gippsland coastline, in the south-east by a series of barrier islands and sandy spits lying end to end and separated by narrow entrances, and to the south by the hills of Wilsons Promontory. Corner Inlet includes the chain of barrier islands, multiple beach ridges, lagoons and swamps, tidal creeks, tidal deltas, and tidal washovers. The mainland coast and several sandy islands are covered with mangroves, saltmarshes, sandy beaches and very extensive intertidal mudflats. The area contains the only extensive bed of the Broad-leafed Seagrass in Victoria. The islands of Corner Inlet, although not rich in plant diversity, are of high biogeographical significance as a result of their geological history and connectivity to the mainland during ice ages. The islands also contain significant areas of saltmarsh and mangroves, both of which are communities of very limited distribution. Corner Inlet supports more than 390 species of marine invertebrates and 390 species of native flora. The Ramsar site also has a high diversity of bird species with thirty-two wader species recorded. Corner Inlet provides extensive tidal flats that are exposed at low tide, which are important feeding areas for waders. It is estimated that nearly 50 per cent of the overwintering migratory waders in Victoria occur in Corner Inlet. The nationally threatened species utilising the Ramsar site include the orange-bellied parrot, growling grass frog, Australian grayling and swift parrot. Corner Inlet was used traditionally by Indigenous people and many archaeological sites including scarred trees, burial sites, artefact scatters, shell middens and camps have been found. Currently, the Ramsar site is used for biological conservation, ports with servicing facilities for off-shore oil and natural gas exploration, commercial fishing, recreational fishing, and other recreational activities. Diving is popular around the numerous shipwreck sites in Corner Inlet and around the barrier islands.