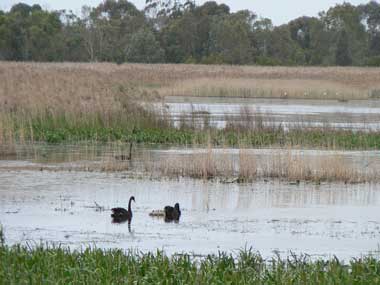 The Edithvale-Seaford wetlands are located in the south-eastern suburbs of Edithvale and Seaford in Melbourne, Victoria. They are the last remnants of the once extensive Carrum Carrum Swamp, a large inter-dunal lagoon that was largely drained in the late 19th century. The Ramsar site is used for flood control, conservation, recreation and education. The wetlands in the Ramsar site are naturally fresh to brackish marshes and open water wetlands, underlain by peat beds that limit the entry of saline groundwater. Both wetlands receive waters from the surrounding urban and semi-rural catchment and discharge to Port Phillip Bay via drains. The wetlands provide habitat in an urban setting for remnant species, supporting a range of native and introduced vegetation. A total of 202 plant species have been recorded for the wetlands, including a significant extension to the range of the native Southern Water Ribbons. Remnant habitats support a variety of native bird, mammal, frog, reptile, fish and invertebrate populations, several of which are of regional and state conservation significance. Seaford Swamp is a site of international importance for the Sharp-tailed Sandpiper. The Carrum Carrum Swamp was part of the extensive lands traditionally occupied the Bunerong people, providing important sources of food and material. The wetlands are now in the midst of an urban environment and are managed as an integral part of the regional drainage system. They are a significant resource for passive and nature-based recreation, and offer environmental education opportunities for local schools, tertiary institutions and the wider community.