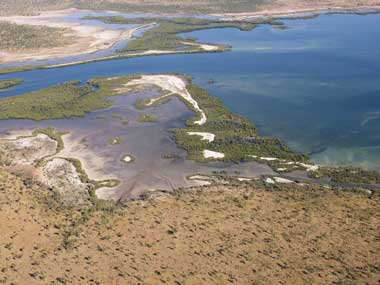 Eighty-mile Beach Ramsar site, located between Port Headland and Broome in north Western Australia, is made up of Eighty-mile Beach and, 40 km to the east, Mandora Salt Marsh. Eighty-mile Beach is a 220 km section of coastline and adjacent intertidal mudflats. Mandora Salt Marsh includes two large seasonal wetlands and a series of small permanent mound springs. A small number of tidal creeks dissect the beach, including Salt Creek which is fed partly from groundwater and has permanent surface water. The Mandora Salt Marsh lakes fill predominantly from rainfall and runoff in the wet season then dry back to clay beds. The mound springs likely come from water deep within the Broome sandstone aquifer rising through fractures in the rock, and resulting in permanent mostly freshwater surface water. The permanence of these freshwater wetlands makes them extremely important to biodiversity in the arid area, providing habitat and drinking water in an otherwise dry environment. Mandora Soak contains peat deposits estimated to be about 7 000 years old. Salt Creek, in Mandora Salt Marsh, contains one of only two inland mangrove communities in Australia. Other vegetation includes paperbark, samphire and freshwater aquatic plants. Eighty-mile Beach is characterised by extensive mudflats supporting an abundance of macroinvertebrates which provide food for large numbers of shorebirds. More than 472,000 migratory waders have been counted on the mudflats during the September to November period. The site is considered to be one of the major arrival and departure areas for migratory shorebirds visiting Australia, particularly on southward migration. It is one of the most important sites in the world for the migration of Great Knot. Flatback Turtle regularly nest at scattered locations along Eighty-mile Beach. Eighty-mile Beach is used for beach based recreation, including four-wheel driving, motorcycling, fishing and shell collecting. Mandora Salt Marsh is mainly used for cattle grazing. The site is traditionally part of Karajarri Country in the north, Nyangumarta Country in the south and Ngarla Country in the southern end of Eighty-mile Beach. The site has artefacts such as middens, pinka (large baler shells used to scoop and carry water for drinking), wilura (used for sharpening spear heads), axes, and flakes, and kurtanyanu and jungari (grinding stones).