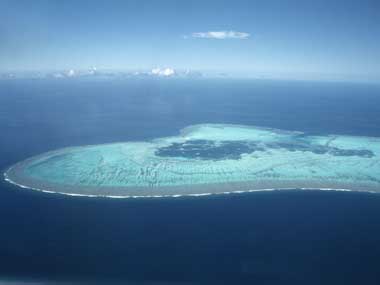 Elizabeth and Middleton Reefs Marine National Nature Reserve is located in the northern Tasman Sea, in Australia’s East Marine Region. It is 630 km east of Coffs Harbour, New South Wales, and 690 km east-south-east of Brisbane, Queensland. Elizabeth and Middleton Reefs are remote coral reef atolls that occur atop isolated, oceanic sea mounts, 50 km apart from each other. They are the most southerly open ocean platform reefs in the world and their coral reef communities are influenced both by tropical and temperate ocean currents. As isolated oceanic wetlands with no permanent dry land, the Reef perimeters provide the only buffer to high-energy impacts of ocean swells and waves, and thus provide for remote sheltered wetland habitats within a vast region of oceanic waters of the western Pacific Ocean. Reef building corals and algae form the dominant components of habitat complexity and ecological features of the site. Elizabeth and Middleton Reefs support several coral species at or near their northern or southern limits of distribution, and species which can self-recruit to the same reef. Seagrass occurs only as scattered plants on the sheltered sandy lagoons at both reefs. The fish communities include seven undescribed fishes and a number of species with specialised habitats and relatively restricted geographic distributions. The Elizabeth and Middleton Reefs populations of the Galapagos Reef Shark form a single genetic stock, which is distinct from the only other Australian population, 173km further south at Lord Howe Island. Threatened species known to utilise the site include the Humpback Whale, Green Turtle, Leatherback Turtle, and Wandering Albatross. At least 30 ships have been recorded wrecked on the Reefs, dating back to the late 18th Century, making the area of considerable marine archaeological significance. Except for the remains of more recent wrecks, which are a conspicuous feature of the Ramsar site, the majority of wrecks have not been accurately located. The wreck Fuku Maru on Middleton Reef supports a small breeding colony of Sea Terns, which due to lack of suitable dry land, otherwise would not occur at the Ramsar site. Currently, Elizabeth and Middleton Reefs are mainly use for nature conservation and scientific research, with limited recreational diving and fishing also occurri