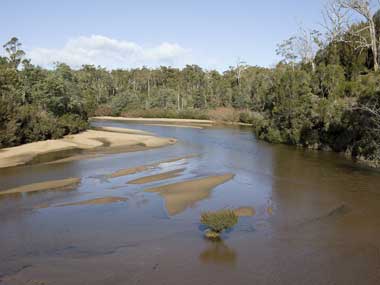 he Flood Plain Lower Ringarooma River Ramsar site is located on the far north-east coast of Tasmania, between Cape Portland and Waterhouse Point. The site is situated on the sandy flood plain of the Lower Ringarooma River which encompasses extensive marshlands and a number of shallow lagoons; Shantys Lagoon, Blueys Lagoon and Bowlers Lagoon. The Ringarooma River drains out into Ringarooma Bay. The hydrology of this site is influenced by tidal flows, river flows and local groundwater. The bulk of the wetland area is above the tidal limit and is largely controlled by inflows from the Ringarooma River.
The Ramsar site is dominated by scrub and tussock grassland vegetation, and includes substantial areas of freshwater marsh habitat in the flood plain. The varieties of habitats support the following vegetation communities: Saltmarsh, Coastal grass and herbfield, Lowland Sedgy heathland, Wet heathland, Coastal heathland, Coastal scrub, Allocasuarina verticillata forest and Eucalyptus coastal forest. The Flood Plain Lower Ringarooma River is considered to be a good foraging area for dabbling ducks and other waterbirds due to the large area of shallow water. A number of bird species listed under international migratory conservation agreements have also been recorded at the site. These include: Cattle Egret, Great Egret, Latham’s Snipe, Curlew Sandpiper, Red-necked Stint, Bar-tailed Godwit, Caspian Tern and Greenshank. Australasian Shoveler, Little Tern, Hooded Plover and Fairy Tern are also known to breed within the Ramsar site. The Ramsar site also provides habitat for threatened species, including four wetland-dependent species: green and gold frog; dwarf galaxias; fairy tern; and Australian grayling. The Flood Plain Lower Ringarooma River was traditionally used by Indigenous people. It also has a history of European occupation and mining exploitation since the early 1800s. Currently, the Ramsar site is used for duck hunting and cattle grazing.