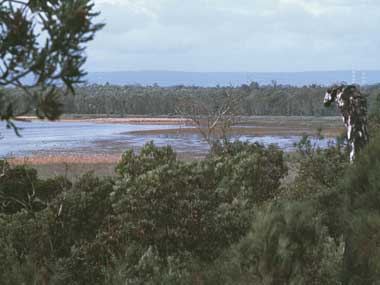 Forrestdale Lake is located in the City of Armadale and Thomsons Lake is located in the City of Cockburn both of which lie within the southern Perth metropolitan area, in Western Australia. The lakes are surrounded by medium density urban development and some agricultural land. The sediments of Thomsons Lake are between 30,000 and 40,000 years old, which are the oldest lake sediments discovered in Western Australia to date. Forrestdale and Thomsons Lakes are fresh/brackish, seasonal wetlands, predominately fed by groundwater. Forrestdale Lake usually dries out by mid-summer whereas Thomsons Lake retains water longer and in some years does not dry completely. These lakes are the best remaining examples of brackish, seasonal lakes with extensive fringing sedgeland, typical of the Swan Coastal Plain. Forrestdale and Thomsons Lakes are situated in sand dune systems and contain large areas of open water fringed by rushes and bulrushes, behind which are trees tolerant of seasonal waterlogging. The higher ground around the lakes supports open woodland. The lakes provide important habitat for waterbirds on the Swan Coastal Plain with 72 species of waterbird occurring at the two lakes and 21 of them breeding. Twenty-one species of migratory birds protected by international migratory bird conservation agreements have been recorded at the lakes. Thomsons Lake is one of the last remaining Swan Coastal Plain refuges for the Australasian Bittern, and the only remaining wetland within the Perth metropolitan area where the Marsh Harrier still breeds. Forrestdale Lake was traditionally an important tortoise hunting site for indigenous peoples from as far away as Pinjarra, 50 kilometres to the south. Contemporary uses of the Ramsar site include bird-watching, nature walks, horse riding and general recreation.