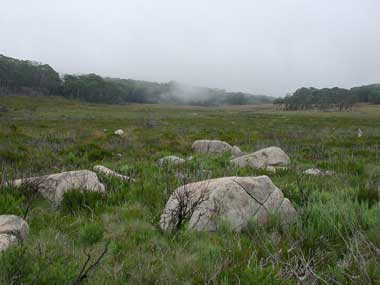 The Ginini Flats Wetland Complex Ramsar site, located in Namadgi National Park in the Australian Capital Territory, is made up of a series of interconnected flats known as Ginini Flats and Cheyenne Flats. The region’s geology is made up of intensively folded metasediments overlying granite. The metasediments allow deep penetration of water down to the granite layer, at which point the water flows along the granite layer until it emerges as seepages and springs. At Ginini Flats and Cheyenne Flats, which are low lying open areas with impeded drainage, the water pools and allows the formation of a bog complex on relatively deep peaty soils. Permanent small streams cross the flats. Ginini Flats and Cheyenne Flats comprises a mosaic of bog, wet heath, wet herbfield, sedgeland, dry heath, and tall wet heath surrounded by sub-alpine snowgum woodland. The flats contain some of the largest and best preserved Sphagnum bogs on the Australian mainland. Well developed peats have developed up to two metres deep beneath areas of wet heath and bog. The age of the peat is estimated to be over 3000 years old. Snow cover on the subalpine ranges in this area provides a significant winter water storage that is released slowly as the snow melts. Snowmelt may also be an important factor in maintaining the hydrological conditions that encourage Sphagnum development within the wetlands. The site is important for the conservation of the nationally threatened Northern Corroboree Frog. The numerous pools scattered throughout the bogs and wet heaths provide an important variety of potential breeding sites for this species. Lathams Snipe, an internationally listed migratory species, regularly uses the area during its intercontinental migration. Mt Ginini lies within the Walgalu country, and the Brindabella Range was visited by Ngunnawal and Ngarigo people. It is likely that the open flats would have been used as a route by indigenous people during their annual visits to the high peaks to harvest the Bogong Moth. The site is in a National Park. It is used for conservation, catchment management, education and recreational activities such as bushwalking and cross-country skiing.