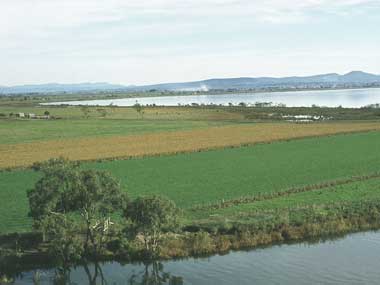 The Gippsland Lakes Ramsar site is located approximately 300 km east of Melbourne on the low-lying South East Coastal Plain bioregion. Covering a vast area, the lakes are a series of large, shallow, coastal lagoons approximately 70 km in length and 10 km wide, separated from the sea by sand dunes. The surface area of the lakes is approximately 364 km2 and the three main water bodies are Lakes Wellington, Victoria, and King. The Gippsland Lakes together form the largest navigable inland waterway in Australia, and create a distinctive regional landscape of wetlands and flat coastal plains of considerable environmental significance. The Mitchell Delta of the Ramsar site is a classic form of digitate delta and ranks as one of the finest examples of this type of landform in the world. The silt jetties of the delta extend almost eight kms into the lake as low, narrow tongues of sediment that were formerly bordered by a wide zone of reedswamp. The Ramsar site contains 11 Ramsar wetland habitat types including most notably, coastal lagoons, subtidal seagrass and algal beds, and a range of saline, brackish and freshwater marsh environments. The site supports a broad range of ecosystem services including nationally and internationally threatened wetland species, waterbird breeding and fish spawning sites. Cultural and socio-economic values are equally diverse, noting the particular importance of the site in a regional context in terms of recreational activities such as boating, recreational fishing and holiday tourism. The Gippsland Lakes support three nationally vulnerable and endangered wetland-associated flora species (dwarf kerrawang, swamp everlasting and metallic sun-orchid), and the nationally threatened growling grass frog and green and golden bell frog . The bird diversity of the Ramsar wetland is high with 86 species of waterbirds being recorded including large numbers of the red-necked stint, black swan, sharp-tailed sandpiper, chestnut teal, musk duck, fairy tern and little tern. Currently, parts of the Lakes system are heavily used for commercial and recreational fisheries and boating activities, while the immediate hinterland has been developed for agricultural use, and limited residential and tourism purposes.