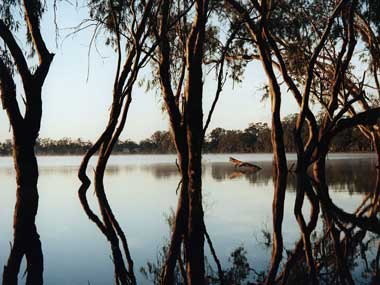 The Hattah-Kulkyne Lakes Ramsar site is located in northern Victoria and lies within the Murray-Darling Basin. The site contains 12 floodplain lakes, representing wetlands classified as permanent freshwater lakes and seasonal intermittent freshwater lakes, which are subject to flooding from the Murray River with flows entering the site predominantly via Chalka Creek. This series of interconnected lakes is the most extensive lake system along the Murray River. The Ramsar site is part of the Hattah Lakes Icon Site under The Living Murray program. The Ramsar site supports a number of vegetation groups, the most dominant of which is Lake Bed Herbland. Other vegetation types include Riverine Grassy Woodland, Intermittent Swampy Woodland and Loamy Sands Mallee. Species such as river red gum (Eucalyptus camaldulensis) and black box (Eucalyptus largiflorens) provide sheltering and nesting habitat for a range of fauna species, particularly bats, parrots, possums, snakes and waterbirds. The lake beds support submerged and aquatic plant communities when flooded and terrestrial species during dry phases. More than 200 native flora species and 183 native fauna species (excluding invertebrates) have been recorded at the site, including some that are nationally and/or internationally threatened such as the regent parrot (eastern) (Polytelis anthopeplus monarchoides), Australian painted snipe (Rostratula australis) and winged peppercress (Lepidium monoplocoides). Twelve species of migratory birds listed under international agreements have been recorded, including white-bellied sea eagle (Haliaeetus leucogaster), glossy ibis (Plegadis falcinellus) and caspian tern (Hydroprogne caspia). Hattah-Kulkyne Lakes is an important cultural heritage site. The lakes have been a focus for traditional Aboriginal society for thousands of years, as evidenced by over 1000 registered Aboriginal archaeological sites within the Hattah-Kulkyne National Park. The local Indigenous community maintains a strong connection to the area. The Ramsar site is part of a national park which has been reserved for nature conservation and recreational activities including bushwalking, driving, fishing, canoeing, swimming and nature study.