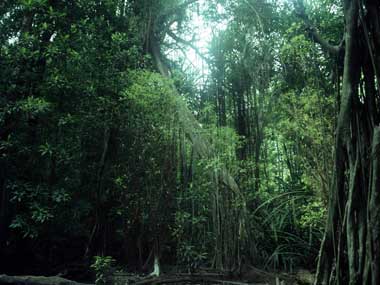 Christmas Island is an Australian External Territory located in the Indian Ocean approximately 2800 kilometres west of Darwin and 500 kilometres south of Jakarta, Indonesia. The Island is approximately 13 500 hectares in size, 63 per cent of which is national park, including two Ramsar wetlands: Hosnies Spring and The Dales. Christmas Island National Park is managed by Parks Australia. Hosnies Spring is a small area of shallow freshwater streams and seepages, 20-45 metres above sea-level on the shore terrace of the east coast of the island. The Ramsar site consists of a stand of two species of mangroves of the usually tidal genus Bruguiera. The Ramsar site includes surrounding terrestrial areas with rainforest grading to coastal scrub, and includes an area of shoreline and coral reef. Whilst mangroves of this group are distributed widely across the region, on Christmas Island the species are rare. The stand represented at Hosnies Spring is most unusual in that it occurs high above sea level (24-37 metres) on an inclined surface, the mangroves are unusually tall (up to 30-40 metres high) and because it appears that the stand has persisted at the site for approximately 120 000 years. The stand is maintained by the permanent freshwater spring. The structure of the stand is also unusual in that it consists of a few very large individuals and abundant saplings and seedlings, typical of a population of long-lived trees where few individuals reach full height. The site is an example of a specific type of wetland unique to Christmas Island and perhaps unique worldwide. The Ramsar site also provides part of the restricted habitat of the blue crab which is protected on the island. Other crab species that occur in the site are the red crab and robber crab. Hosnies Spring is isolated and relatively inaccessible so there is minimal human impact on the area.