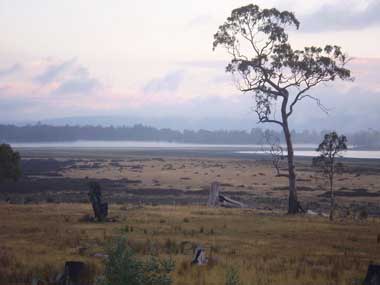 The Interlaken Lakeside Reserve Ramsar site lies approximately 20 kilometres west of the township of Tunbridge, Tasmania at an altitude of about 800m above sea level. The site includes the north-western corner of Lake Crescent, the marshy areas at the lakes perimeter, as well as Lakeside Island and a large section of the dry land between Lake Crescent and Lake Sorell. The site excludes the private property block within it. Lake Crescent is a permanent freshwater water body. It is separated from Lake Sorell to its immediate north by a low strip of land, and the waters in each lake are connected by the Interlaken Canal and a drain through the marsh. Although the drain and canal control water flowing into Lake Crescent, and the outlet structure on Lake Crescent controls water exiting the lake, water levels are still influenced by rainfall and evaporation, which can result in large fluctuations in lake levels. In drought periods lake levels drop considerably. Freshwater aquatic vegetation communities are present on the site with the dominant plant species present being Fine Twigsedge and Greater Waterribbons. Running Marshflower, Floating Clubsedge, Amphibious Watermilfoil and Floating Pondweed are also common. Lake Crescent has a high abundance of phytoplankton. The site supports a large population of the nationally endangered fish, Golden Galaxias. When full, the lake provides important habitat, for feeding, resting and breeding, for the Black Swan and up to five species of ducks. Five migratory bird species listed under international agreements, the Great Egret, Cattle Egret, Latham’s Snipe, White-bellied Sea Eagle and the Caspian Tern, have used the Interlaken Lakeside Reserve for feeding and resting. The Interlaken Lakeside Reserve is a public reserve and it is used for fishing, recreational boating, and duck shooting. The site is also traditionally country of the Lairmairrener people, who used the resources of the lake for food, including eels and birdlife.