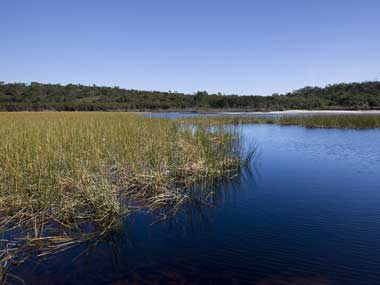 The Jocks Lagoon Ramsar Site is located about five kilometres south-east of the township of St Helens on the north-east coast of Tasmania. It is one of a chain of lagoons, swamps and wetlands occurring along St Helens Point. Jocks Lagoon is a small freshwater lagoon which is fed from surface runoff and groundwater. The site is located in sands and clays separated from the sea by a beach and sand dunes. The dominant vegetation community within the lagoon itself is freshwater aquatic sedgeland and rushland, with several beds of tall sedges and waterribbons as emergent plants. Spreading Swordsedge open sedgeland and Jointed Twigsedge dominate a small edge zone on the south-west side in a mixture with scrub. Melaleuca swamp forest dominates along the eastern side of the lagoon. On higher ground these communities become coastal heathland and Acacia coastal scrub with some areas dominated by the introduced Marram Grass. Most of the vegetation communities on the site are threatened in Tasmania. The site also contains two regionally rare plant species, the Jointed Twigsedge and Erect Marshflower. The lagoon supports microcrustaceans and macrocrustaceans, including Burrowing Freshwater Crayfish. The Brown Froglet and Eastern Banjo Frog also occur within the site. Most of the site is private freehold land, with a small section at the south-east end falling within the St Helens Point Conservation Area. The site is mainly used for conservation and recreation.