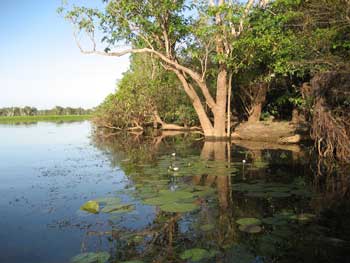 Kakadu National Park Ramsar site is located approximately 220 kilometres east of Darwin, Northern Territory. The National Park straddles the western edge of the Arnhem Land Plateau where scarp retreat and lowland erosion have formed a diverse landscape of escarpment, rocky gorges and waterfalls, broken hills, valleys and extensive floodplains. The Ramsar site is a mosaic of contiguous wetlands comprising the catchments of two large river systems, the East and South Alligator rivers, seasonal creeks and the lower reaches of the East Alligator River. It also includes the Magela Creek floodplain, the lower South Alligator floodplain, virtually the entire West Alligator River system and nearly all the Wildman River system.
Kakadu National Park comprises of sandstone plateau communities, escarpments, extensive seasonal floodplains, estuaries, tidal flats and offshore islands. The rivers are tidal in their lower reaches and are associated with extensive tidal flats formed from riverborne mud. The tidal mudflats of the rivers are largely bare of vegetation except for the inland zone where samphire, sedges and grasses are present. The vegetation of the wetlands is predominantly grass and sedge communities with freshwater mangrove or paperbark swamps along stream and lagoon edges. The Wildman, West Alligator and East Alligator rivers support bands of mangrove forest along their tidal reaches. Lilies and ferns occur in the deeper permanent lagoons. During the dry season water contracts into lagoons and billabongs and up to two million waterbirds accumulate on the floodplains. At least 53 species of waterbirds use the Ramsar site including large concentrations of magpie geese and wandering whistling-duck. These and many other species breed in the wetlands but most species are dry season migrants. Both freshwater and saltwater crocodiles are known to breed within the Ramsar site. Fifty-nine fish species are known from the wetland, including eight with narrowly restricted ranges. The area has significant cultural and heritage value. Kakadu has been home to Indigenous people for more than 50 000 years, and during that time the land and their culture have become intertwined. Kakadu National Park is jointly managed by its traditional owners and the Australian Government, through the Kakadu Board of Management and the Director of National Parks. The Ramsar site is also highly valued for its nature-based tourism and conservation activities.