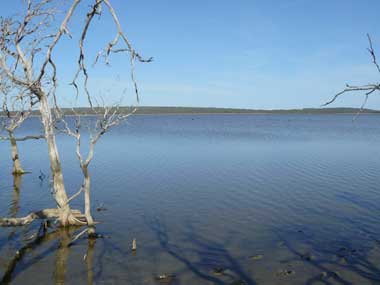 The Lake Gore Ramsar site is located 34 kilometres west of the town of Esperance, in Western Australia’s south-west. The Ramsar site comprises of the near-permanent saline Lake Gore, and part of a downstream system of inter-connected lakes and swamps of various sizes which are intermittently inundated. The Ramsar site contains open-woodland of Saltwater Paperbark, sedge understory, and low shrublands of samphire and grasses. Surrounding areas are either cleared or support open-scrub or open-heathland. Lake Gore is the single most important wetland for the Hooded Plover, and almost one third of the world population of Hooded Plover occurs regularly at the Ramsar site. The site is also important for moulting by thousands of Australian Shelduck, and extensive use by Australian Shelducks and Banded Stilts indicates that Lake Gore is one of the most important drought refuges for waterbirds in the bioregion. Forty-eight waterbird species have been recorded at Lake Gore, and the Ramsar site supports threatened species such as the Fairy Tern and Freckled Duck. Lake Gore and the Dalyup and West Dalyup Rivers have been used historically by the traditional owners in the Esperance region and they are still regarded as significant areas for food gathering and fishing. Current land use is primarily nature conservation, with some low-level passive recreational use.