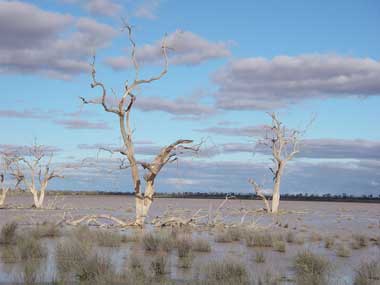 Lake Pinaroo is located within Sturt National Park in the arid north-west corner of New South Wales. The lake is the largest terminal basin in the Simpson-Strzelecki Dunefields biogeographic region. Lake Pinaroo only fills when Frome Swamp overflows during intense local rainfall events. However, once full the lake holds water much longer than any other wetland within the region and can take up to 6 years to become dry again as there is no point of outflow. Therefore, it provides a reliable breeding area for a substantial number of waterbirds and is also considered to play an important role for birds migrating from surrounding wetlands including Coongie Lakes and the Paroo wetlands. Generally there is very little vegetation found on the bed of Lake Pinaroo and Neverfail is the dominant species. Coolibah regrowth is found on the high ground of the lake margins. The surrounding sand dune country is vegetated with Hopbush, Turpentine, Saltbush, Budda, and Whitewood. Sturt National Park supports an extremely diverse range of bird species and approximately 150 species have been recorded. When full, Lake Pinaroo supports large numbers of waterbirds and waders and the common species include Pink-eared Duck, Grey Teal, Black-tailed Native-hen, and Wood Duck. The Ramsar site and surrounding areas also provide valuable habitat for a number of threatened species including the Grey Falcon, Australian Bustard, Brolga, Freckled Duck, and Black-breasted Buzzard. Lake Pinaroo also supports a number of native mammals and reptiles such as Forrest’s Mouse, Fat-tailed Dunnart, Sandy Inland Mouse, and Beaked Gecko. Although there are no officially recorded sites of Indigenous heritage in Lake Pinaroo, Sturt National Park has an exceptionally high density and variety of Indigenous sites including hearths, middens, ceremonial sites, quarries and abundant stone artefacts, suggesting that a large Indigenous population once occupied the area. The early explorer Charles Sturt built Fort Grey adjacent to the lake as a base from which to launch expeditions into the Simpson Desert, and there are a number of pastoral industry remnants in the area. The lands within the Ramsar Site are permanently dedicated as National Park and are currently used as a nature conservation area with tourism associated activities.