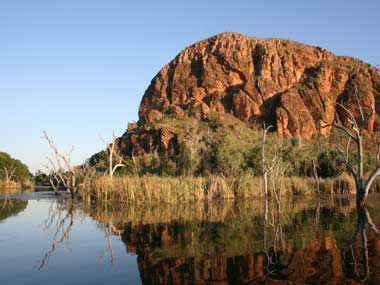 The Lakes Argyle and Kununurra Ramsar site is located in north Western Australia. Lake Kununurra is in and near the town of Kununurra and Lake Argyle is immediately upstream from Lake Kununurra. Lakes Argyle and Kununurra were formed by the damming of the Ord River. The Diversion Dam in 1963 created Lake Kununurra and Argyle Dam in 1972 created Lake Argyle. Lake Argyle is the largest freshwater body in northern Australia. The major rivers draining into the lake are the Ord River, Bow River and Behn River. Lake Kununurra site extends from the Diversion Dam to the base of the Argyle Dam. It comprises about 15 km flowing river, 40 km flooded river bed and several adjoining swamps. Lake Kununurra and its associated wetlands have a consistent water level, while Lake Argyle fluctuates according to the balance between rainfall, evaporation and irrigation water requirements. Water is fresh throughout the site. The fluctuation of water levels in Lake Argyle has prevented the establishment of much vegetation on the shore of Lake Argyle, although in some sections dense belts of trees have grown. Aquatic plants grow in shallow water at the edge of the lake. As water levels are stable in Lake Kununurra and the swamps, they have developed vegetation at their fringe consisting of grassland, rushes or woodland. There are emergent dead trees throughout the site that died when the area became permanently flooded. The dead trees provide a variety of roosting and breeding sites for fauna. The site is used by waterbirds, particularly during the dry season when up to 200,000 waterbirds have been recorded at the site. Up to 74 waterbird species have been recorded at Lake Argyle, including 22 species listed under international conservation treaties. The site supports at least 15 species of freshwater fish. Other fauna at the site include the freshwater crayfish Macrobrachium rosenbergii, the native Water Rat and three species of freshwater turtle, including the North-western Red-faced Tortoise which has a restricted distribution from the Kimberley to the Victoria River region. The site is also a major breeding area for Freshwater Crocodile. The water in the lakes is used for irrigation, diamond mines, hydro-electricity and domestic use. Other uses for the site include recreational fishing and boating, scenic tours and birdwatching. Lakes Argyle and Kununurra are within the traditional lands of the Miriuwung and Gajerrong language groups.