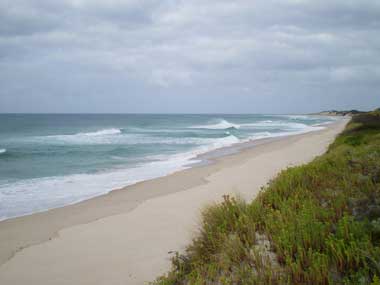 The Lavinia Ramsar site is located on the north-east coast of King Island, Tasmania. The boundary of the site forms the Lavinia State Reserve, with major wetlands in the reserve including the Sea Elephant River estuary area, Lake Martha Lavinia, Penny’s Lagoon, and the Nook Swamps. The shifting sands of the Sea Elephant River’s mouth have caused a large back-up of brackish water in the site, creating the saltmarsh which extends up to five kilometres inland. The present landscape is the result of several distinct periods of dune formation. The extensive Nook Swamps, which run roughly parallel to the coast, occupy a flat depression between the newer parallel dunes to the east of the site and the older dunes further inland. Water flows into the wetlands from the catchment through surface channels and groundwater, and leaves mainly from the bar at the mouth of the Sea Elephant River and seepage through the young dune systems emerging as beach springs. The Lavinia State Reserve is one of the few largely unaltered areas of the island and contains much of the remaining native vegetation on King Island. The vegetation communities present on the site include Succulent Saline Herbland, Coastal Grass and Herbfield, Coastal Scrub and King Island Eucalyptus globulus Woodland. The freshwater areas of the Nook Swamps are dominated by swamp forest. Nook Swamps and the surrounding wetlands contain extensive peatlands. The site is an important refuge for a collection of regional and nationally threatened species, including the nationally endangered Orange-bellied Parrot. This parrot is heavily dependent upon the samphire plant, which occurs in the saltmarsh, for food during migration. They also roost at night in the trees and scrub surrounding the Sea Elephant River estuary. Several species of birds which use the reserve are rarely observed on the Tasmanian mainland, including the Dusky Moorhen, Nankeen Kestrel, Rufous Night Heron and the Golden-headed Cisticola. The site is currently used for conservation and recreation, including boating, fishing, camping and off-road driving. There are artefacts of Indigenous Australian occupation on King Island that date back to the last ice age when the island was connected to Tasmania and mainland Australia via the Bassian Plain.