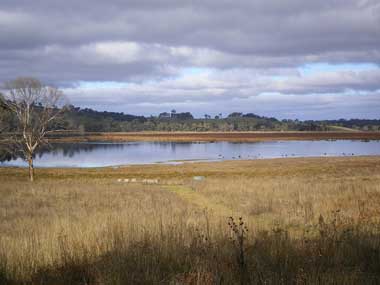 The Little Llangothlin Nature Reserve Ramsar site is located between Armidale and Glen Innes on the New England Tablelands in north-eastern New South Wales (NSW). The Ramsar site comprises all of the 257.6 hectare Nature Reserve which is managed by the NSW National Parks and Wildlife Service. The two main wetlands which occur within the Ramsar site, Little Llangothlin Lagoon and Billy Bung Lagoon, are upland lakes on the plateau of the New England Tablelands. Little Llangothlin Lagoon is a permanent lake of approximately 105 hectares in size and 2 metres in depth, one of the largest and deepest lakes within the New England Tablelands lakes system which enables it to contain water in almost all years except during extreme droughts. Its size and depth and its consequent ability to provide a relatively permanent water source makes it a valuable drought refuge for waterbirds. Little Llangothlin Nature Reserve Ramsar site also contains a portion, approximately 7.7 hectares, of the intermittent 17 hectare Billy Bung Lagoon. In addition the site supports terrestrial habitat including about 44 hectare of eucalypt woodland with grass understorey (including patches of the nationally threatened ecological community ‘New England peppermint (Eucalyptus nova-anglica) grassy woodlands’) and cleared areas that are predominantly grasslands containing kangaroo grass (Themeda australis) and exotic pasture species (Benson and Ashby 2000). The grasslands support the nationally endangered Austral toadflax (Thesium australe), a small plant which parasitises the roots of kangaroo grass. The site regularly supports large numbers of waterbirds and waders, and is an important drought refuge for waterbirds. The nationally endangered Australasian bittern has been recorded twice at the site in recent years and is suspected to breed there. Little Llangothlin Nature Reserve was traditionally used by Indigenous peoples and numerous artefacts have been found at the site. Currently the Ramsar site is used for scientific research, teaching, and nature-based recreation.