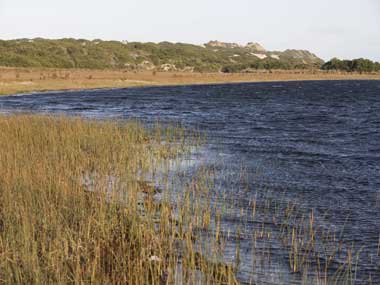 Little Waterhouse Lake is located seven kilometres south-west of Waterhouse Point, and lies between the towns of Bridport and Tomahawk on the north-east coast of Tasmania. The site forms part of the Waterhouse Point wetlands complex which incorporates Blackmans Lagoon, lakes, marshlands, and creeks with active sand dunes along the coast. The lake is a coastal freshwater lagoon that has formed in a depression between two sand dune systems after drainage to the sea was blocked by some mobile coastal dunes. Little Waterhouse Lake is brackish and has a maximum depth of 2-4 m. Lake levels fluctuate depending on rainfall, with water losses controlled by the rate of surface flow in the outflow stream, seepage through the sand, and evaporation. Little Waterhouse Lake has dense aquatic growth and high species richness. Around the fringes of the lake, freshwater aquatic sedgeland and rushland vegetation communities are dominant. Other vegetation communities at the site include open Coastal scrub, Marram grassland, Sharp Clubsedge sedgeland and Acacia longifolia coastal scrub. Tiny Duckweed also occurs on the site and has limited distribution in Tasmania. The Ramsar site provides habitat for the threatened Dwarf Galaxias, and the lake has a high diversity of crustacean species, such as the Burrowing Freshwater Crayfish. Three of Tasmania’s eleven frog species are known to occur in the site. The area around the Little Waterhouse Lake was significant to Indigenous groups. The North East people used the heaths and plains behind the coast, which they kept open and clear by burning. The Ramsar site is currently used for various recreational activities, particularly fishing for the introduced Brown Trout and Rainbow Trout.