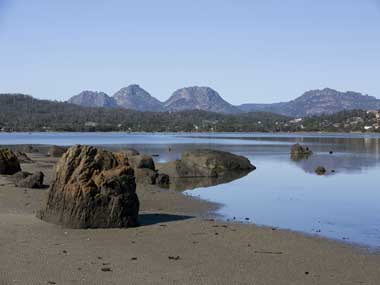 Moulting Lagoon is situated on the central east coast of Tasmania, between the townships of Swansea and Bicheno and approximately 6 km north-west of the township of Coles Bay. The lagoon is a large estuary at the mouths of the Swan and Apsley Rivers. The estuary lies at the head of Great Oyster Bay where the Freycinet Peninsula extends offshore to the south. The lagoon formed with the partial closure of the mouths of the Swan and Apsley Rivers, due to the creation of a bayhead spit and associated dunefield between 10 000 and 6 000 years ago. The lagoon contains areas of both shallow and deep water and is surrounded by periodically exposed mudflats and saltmarsh. The plant communities around Moulting Lagoon reflect the wide diversity of terrain and consequent soil drainage patterns. Aquatic vegetation in the estuary is largely composed of seagrasses. Succulent saline herbland and saline sedgeland and rushland, both saltmarsh communities, surround the lagoon. Vegetation in the shallower areas, mainly Beaded Grasswort and Sea Rush, provides an important nesting, roosting and feeding habitat for the numerous resident waterfowl. The Ramsar site is an important breeding area for Black Swan and an important staging area for all the other species of waterfowl in Tasmania, with particularly large summer concentrations of Australian Shelduck and Chestnut Teal. It also supports the largest known Tasmanian flocks of Greenshank. Moulting Lagoon is part of the Moulting Lagoon Game Reserve. The area historically was used for the harvest of waterfowl and their eggs by Indigenous people who lived around the lagoon. Current use of the Ramsar site includes recreational activities such as fishing and hunting, and commercial activities such as aquaculture and tourism.