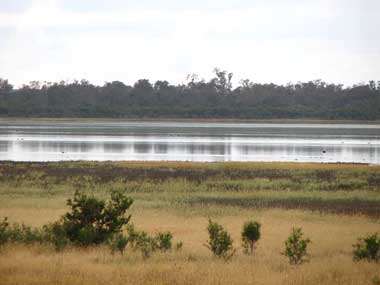 The Muir-Byenup System Ramsar site is located inland 55 km south-east of the town of Manjimup in south-west Western Australia. The Ramsar site comprises a suite of partly inter-connected lakes and swamps in an internally draining catchment. The wetlands are varied in size, salinity (saline to fresh), permanence (seasonal to permanent) and substrate (peat and inorganic). The Ramsar wetland includes Lake Muir, Byenup Lagoon, Tordit-Gurrup Lagoon, Poorginup Swamp, Neeranup Swamp, Coorimup Swamp and Wimbalup Swamp and reserves in the surrounding area. Lake Muir is fringed by sedgelands, low samphire shrubland and Melaleuca dominated wetland scrub. The rest of the wetlands on the site are fringed by sedgelands, and Melaleuca, Astartea and Agonis shrublands. Eucalypts, such as Jarrah and Yate, dominate higher elevations. The site has a rich diversity of plants for such a small area, with over 600 native plant species recorded. This diversity may be due to the wide range of complexes of soil types and hydrological patterns found over short distances on the site. Three nationally vulnerable wetland-dependent orchids, the Harrington’s Spider-orchid, Christine’s Spider Orchid and Tall Donkey Orchid, also occur in the site. The Muir-Byenup System Ramsar site supports a large number and diversity of waterbirds, with more than 50 waterbird species recorded. Lake Muir is a migration stop-over site for shorebirds such as the Red-necked Stint. The open lakes are used for moulting by thousands of Australian Shelduck and as a drought refuge by large numbers of waterbirds. The Little Bittern, Spotless Crake, Australasian Bittern, Black Swan, Eurasian Coot and Silver Gull all breed at the site. Seven native fish species have been recorded in the site including the nationally vulnerable Balston’s Pygmy Perch. The site is located within a series of reserves for water and conservation of flora and fauna. The bird observatory on Muir Highway provides facilities for nature-based recreation such as bird watching. The wetlands are spiritually significant for the Noongar people.