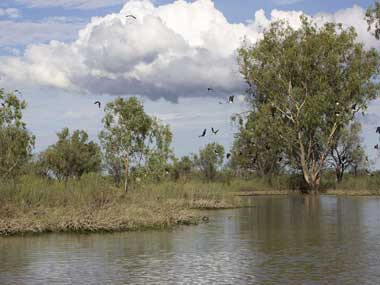 The Narran Lake Nature Reserve is situated in the north-west of New South Wales (NSW), approximately 75 kilometres north-west of Walgett and 50 kilometres north-east of Brewarrina. Narran Lake Nature Reserve covers part of a large terminal wetland of the Narran River in NSW at the end of the Condamine River system which flows from Queensland. The Narran River lies within the Murray-Darling Basin. The Ramsar site contains two open water areas, Clear Lake and Back Lake. Annual inflows to the Narran wetlands are highly variable and Back and Clear Lakes will usually retain water for approximately 4-6 months following inundation. The lakes are surrounded by extensive channelised wetlands vegetated with Lignum, River Cooba, and River Red Gum. The eastern half of the Reserve is low, gently undulating, sandy and rocky ridge country. Other vegetation communities within the Ramsar site include sedges and ephemeral herbs, Common Reed, Coolibah and Black Box woodland. Lignum, River Red Gum, River Cooba and Coolibah all require flooding to grow and regenerate. Narran Lake Nature Reserve provides habitat for numerous waterbird species listed under international migratory bird conservation agreements. These include Greenshank, Marsh Sandpiper, Latham’s Snipe, Black-tailed Godwit, Curlew Sandpiper and Sharp-tailed Sandpiper. The extensive area of Lignum is a particularly important habitat for bird breeding events, supporting large nesting colonies of spoonbills, cormorants, and other waterbird species. The Narran Lakes area also has a very high traditional, as well as contemporary, social and spiritual significance Indigenous people. Traditionally, the area was a common meeting place for a number of Indigenous peoples. In present times, the lake area is used by local Indigenous communities for educational purposes. A number of archaeological sites have been found within the Reserve, such as shell middens, hearth sites with clay ovens, quarries, and artefact scatters. Current use of the site is focused on nature conservation, education and recreational activities.