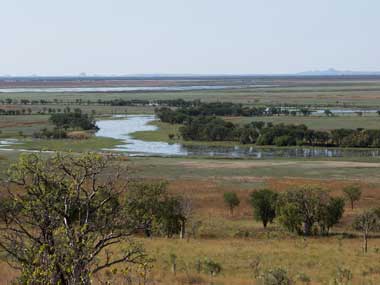 The Ord River Floodplain Ramsar site, in north-east Western Australia, is a floodplain and estuarine wetland system. Parry Lagoons, at the southern end of the site, has broad floodplains that periodically flood and dry out and permanent waterholes. North of the lagoons, the site includes the Ord River Estuary leading into the Cambridge Gulf. The north-east end of the site heads around the coast to include a series of extensive intertidal creeks and flats known as the False Mouths of the Ord. The upstream portion of the floodplain and river tends to be freshwater, and becomes more saline as the river approaches the Cambridge Gulf and falls under tidal influence. Mangroves are the most common vegetation in the site, extending from the False Mouths of the Ord to the upstream sections of the estuary. The mangroves form narrow fringes along the intertidal areas, with saltmarsh on higher ground. The intertidal mangroves support many species of birds and bats, and are a breeding area for banana prawns. The Parry Lagoon floodplains are dominated by grassland, the lower Ord River and Parry Creek by riparian woodland, and the permanent waterholes by aquatic vegetation. Over 200 species of birds have been recorded within the site including waterfowl, migratory shorebirds, mangrove birds and terrestrial species. The site supports the nationally threatened Australian painted snipe. The wetlands are habitat for many diadromous fish species (that require migration between marine and more freshwater environments some time during their life), including the nationally threatened species freshwater sawfish, green sawfish and northern river shark. Reptiles that use the site include the freshwater crocodile and saltwater crocodile. The Ord River Floodplain Ramsar site lies within the boundaries of six Indigenous language groups: Miriuwung, Gajerrong, Dulbung, Guluwaring, Djangade and Biambarr. The site contains Indigenous burial sites, artefact scatters, quarries, paintings and ceremonial sites. The Ord River Nature Reserve and Parry Lagoons Nature Reserve are gazetted for the conservation of flora and fauna. The Lower Ord River and the False Mouths of the Ord are popular destinations for locals and visitors for recreational fishing, crabbing and boating. The Parry Lagoons Nature Reserve is also important for passive recreational activities such as bird watching and bush walking. Nature based commercial tourism is an important source of income for the region.