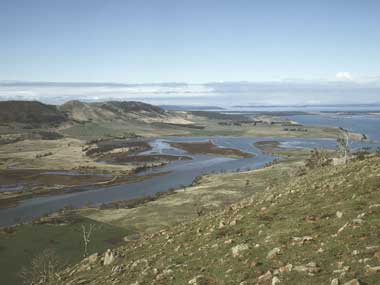 The Pitt Water-Orielton Lagoon Ramsar site is located on the south-east coast of Tasmania, approximately 20 kilometres east of the city of Hobart, between the towns of Cambridge and Sorell. Pitt Water is an almost land-locked body of tidal salt water with a narrow entrance to Frederick Henry Bay. Orielton Lagoon is separated from Pitt Water by a causeway constructed in 1868. The whole area is protected from the open sea by a large mid-bay spit and associated dunefield.

Most of the Ramsar site is open water fringed by saltmarsh communities, mudflats and rocky shores. The large areas of tidal mud and sand flats leaves extensive areas exposed as suitable feeding areas for wading birds.

Pitt Water-Orielton Lagoon was traditionally used by Indigenous people of the area and the Ramsar site contains some middens and other evidence of Indigenous occupation. Currently the area has a diversity of landuses including pastureland grazing, forestry, irrigated cropland, residential development, shellfish aquaculture, recreation and nature conservation