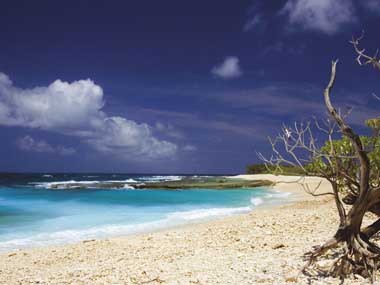 The Cocos (Keeling) Islands are a group of 27 coral islands forming two atolls 24 kilometres apart and located 2900 kilometres northwest of Perth in the Indian Ocean. North Keeling Island, with an area of just 1.2 square kilometres, is part of the Cocos Islands. The Ramsar site includes the marine area surrounding the Island along with the terrestrial area of North Keeling Island, matching the boundary of Pulu Keeling National Park. As an island atoll in its most natural state, North Keeling is a significant biological resource and is internationally important for the conservation of biodiversity. The Ramsar site is one of the few remaining islands where rats have not yet been introduced, and is generally unaffected by feral animals. The island has a tall forest of pisonia, coconuts, an extensive stand of ironwood, pemphis, and endemic pandanus, amongst other species. The Ramsar site is also an internationally significant seabird rookery. Fifteen species of birds recorded on the Island are listed under international migratory bird agreements and 15 seabird species use the atoll for nesting. The breeding colony of the dominant bird species, the red-footed booby, is one of the largest in the world. It is also the main locality of the endemic Cocos buff-banded rail. The island is home to a number of crabs including the robber crab and red crab, and is used by the threatened green turtle and hawksbill turtle. Green turtles also occasionally nest on North Keeling Island. Some 525 fish species are recorded from the Cocos Islands, including the angelfish, which has only been recorded from these islands and Christmas Island. There are no mammals on the island, although marine mammals visit the surrounding waters. The Cocos (Keeling) Islands were not inhabited until 1825, although their existence was known of prior to this. The islands were the only coral islands visited by Charles Darwin in 1836, and were a key feature in the development of his theory of coral reef formation. The wreck of the SMS Emden, a WWI German battleship, is off the southern side of the island and is a protected site. Current use of the Ramsar site includes scientific research, and tourism activities such as scuba diving, snorkelling and surfing.