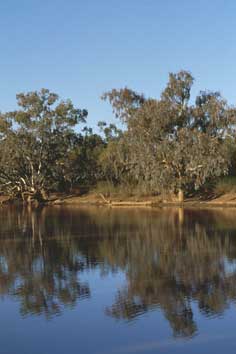 The Roebuck Bay Ramsar site is located at Roebuck Bay near Broome in north Western Australia. Roebuck Bay has a very large tidal range which exposes around 160 square kilometres of mudflat, covering most of the Ramsar site. Waters more than 6 m deep at low tide are excluded from the site. The eastern edge of the site is made up of microscale linear tidal creeks. The site receives tidal seawater as well as fresh surface and groundwater, and the balance between the two influences the residual groundwater salinity and the distribution of plants and animals. Mangrove swamps line the eastern and southern edges of the site, and extend up into the linear tidal creeks. They are important nursery areas for marine fishes and crustacea, particularly prawns. Extensive seagrass beds occur in the bay, providing an important feeding ground for dugong and green turtle. Dolphins and nationally threatened turtles also regularly use the site. The intertidal mud and sand flats support a high abundance of bottom dwelling invertebrates, which are a key food source for waterbirds. The site is one of the most important migration stopover areas for shorebirds in Australia and globally. For many shorebirds, Roebuck Bay is the first Australian landfall they reach on the East Asian Australasian Flyway. The total numbers of waders using the site each year is estimated at over 300 000. The northern beaches and Bush Point provide important high tide roost sites. The site is used for recreational or tourism activities such as fishing, crabbing, sightseeing and bird watching. Broome Bird Observatory, a small reserve at the northern end of the site, engages in shorebird research and public education. Roebuck Bay lies in the traditional estate of indigenous people belonging to both Jukun and Yawuru groups. The site was an important area for seasonal meetings, exchanging gifts, arranging marriages and settling disputes. Numerous shellfish middens, marking former camping places, can still be seen along coastal cliffs and dunes. Indigenous people continue to make extensive use of Roebuck Bay’s natural resources for activities such as gathering shellfish, fishing and hunting.