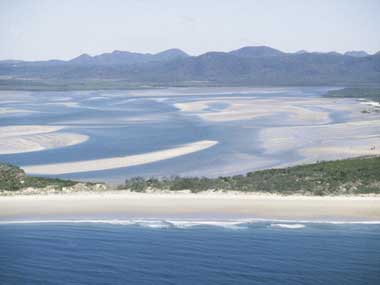 The Shoalwater and Corio Bays Area (Shoalwater Bay Training Area, in part – Corio Bay) Ramsar site is located about 50 km north of Rockhampton, Queensland. The majority of the site is set around Shoalwater Bay in the Shoalwater Bay Military Training Area (SWBTA) and includes adjacent lands and marine waters from Broome Head in the north to the southern boundary of the SWBTA. The other component of the site includes the intertidal areas of Corio Bay in the south. The area contains a wide diversity of landscape types including undulating lowlands and hills, riverine plains, swamps, estuarine inlets, old beach ridges, dunes, sand beaches flanked by coastal cliffs, and intertidal sand and mudflats. The wetland types on the site include freshwater lagoons, swamps and streams, leading into marine, estuarine and intertidal wetlands. The site is located in a zone where the temperate climate merges into tropical and sub-tropical climates. The climatic gradient, diversity of geomorphology and good condition of the site has resulted in a rich diversity of species. The site supports about 791 plant species and sub-species, 445 fish species, 22 frog species, 66 reptiles species, 226 birds species, 24 mammal species and 23 bat species. Nationally threatened species that occur at the site include the Green Turtle, Hawksbill Turtle, Flatback Turtle, Loggerhead Turtle, Honey Blue-eye fish and Oxleyan Pygmy Perch. Dozens of migratory bird species protected under international conservation agreements have been recorded at the site. The site has been identified as being of international importance to the migratory Eastern Curlew, Whimbrel and Great Knot. A range of other wetland birds and shorebirds feed and breed in the area. The Shoalwater Bay area has been gazetted as a Defence Practice Area under the Defence Act 1903, and is used primarily for defence activities. Corio Bay is part of Queensland’s Byfield National Park used primarily for conservation and recreation activities. The area is part of the traditional lands of the Darumbal people. The dune fields contain archaeological sites including shell middens, scatters of stone tools and dinner camp sites.