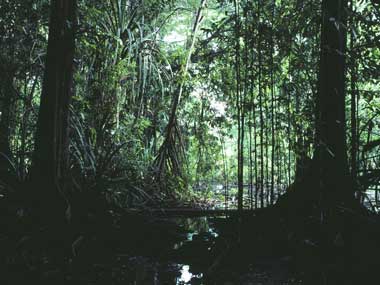 Christmas Island is an Australian External Territory located in the Indian Ocean approximately 2800 kilometres west of Darwin and 500 kilometres south of Jakarta, Indonesia. The Island is approximately 13 500 hectares in size and contains two Ramsar wetlands: The Dales and Hosnies Spring. The Dales Ramsar site covers 583 hectares and is located on the western coastline of Christmas Island. The western boundary of the Ramsar site extends 50 metres seaward from the low water mark and incorporates part of the coastline. The Dales are located within the Christmas Island National Park which is managed by Parks Australia. The Ramsar site has a near-pristine system of seven watercourses collectively known as The Dales. The Dales includes permanent and perennial streams, permanent springs, and include the majority of surface water on the Island. Most rainfall on Christmas Island filters down through the soil and limestone, and surface runoff only occurs after heavy rain. The Dales contain numerous wetland types including surface and karst features, and inland and coastal wetlands. The Dales support a number of unique ecological and geomorphic features including anchialine cave communities, surface karst including the unique stepped tufa deposits at Hugh’s waterfall, a stand of Tahitian chestnuts, a large number of endemic terrestrial species and a significant number of seabirds including Abbott’s booby, red-footed booby and the brown booby, all of which breed at the site. Vegetation in The Dales ranges from tall plateau rainforest to lower coastal vegetation. Migratory or vagrant bird species use The Dales as a staging site during migration, and a landfall for vagrant bird species outside their range. Christmas Island is also an important habitat, breeding and spawning area for land crabs. The endemic red crab, tens of millions of which live on the island, migrate from the forest to the coast each year for the breeding season. Blue crabs in particular are reliant on the Ramsar site, as they require freshwater to maintain renal function. During the wet season there is sufficient surface water in forests to maintain gill functioning in blue crabs and they can range over large areas of Christmas Island. However, during the dry season they are restricted to permanent freshwater sources, such as that provided by The Dales. The Dales are used for conservation and recreation, including sightseeing, walking and camping