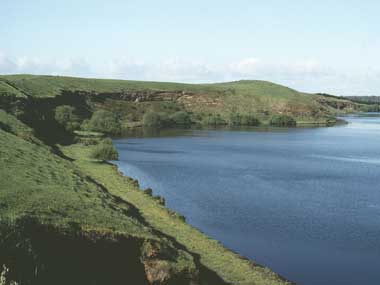 The Western District Lakes Ramsar site is located within the western volcanic plains region of Victoria, near the township of Colac. It lies within the landlocked Lake Corangamite catchment and is comprised of nine separate lakes. The lakes vary in size, depth and salinity, depending on their method of formation, catchment area and outlet. Lake Corangamite is the largest, covering approximately 25 000 hectares. The only significant river in the region, the Woady Yallock River, drains into this lake. The Ramsar site is roughly equivalent to the high-water mark of the nine lakes and vegetation within the site is therefore limited. Approximately 10-20% of the lake margins are vegetated, mostly with saltmarsh communities. A total of five submerged aquatic plant species have been recorded. Two nationally threatened species, the salt-lake tussock-grass (Poa sallacustris) and spiny peppercress (Lepidium aschersonii) occur within the Ramsar site. The Ramsar site provides habitat for approximately 70 waterbird species, 20 of which are listed under international migratory species treaties and 11 of which breed within the Ramsar site. Some species congregate there in large numbers, including the Australian shelduck, chestnut teal, Australasian shoveler, Eurasian coot and banded stilt. Six native species of fish have been recorded within the lakes of the Ramsar site. Of the invertebrates recorded, molluscs dominate most of the saline and mesosaline lakes whilst Lake Colongulac is dominated by oligochaetes. Hydrology is variable across the site. Some of the lakes are permanent whilst others are seasonal or intermittent. All are connected to saline, surficial groundwater and all except Lakes Beeac and Cundare are groundwater flow-through lakes. Most of the water is received through direct rainfall and lost via evaporation. All lakes are highly turbid and have high nutrient levels. The region is spiritually and culturally significant for the Djargurd Wurrung and Gulidjan Indigenous groups. There are several important archaeological sites in the Ramsar site, which was particularly significant for the provision of food.