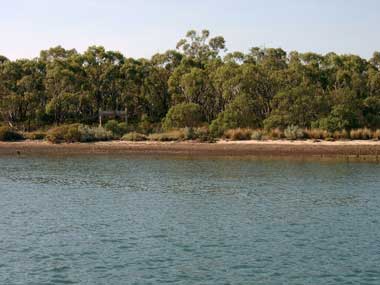 Western Port is a large bay in southern Victoria incorporating around 260 kilometres of coastline, connected to Bass Strait by a wide channel between Flinders and Phillip Island, and a narrow channel between San Remo and Phillip Island. Six rivers from the north and east of the catchment flow into the northern and eastern shores of Western Port and several minor rivers and creeks on the eastern slopes of the Mornington Peninsula drain into the western shores.

The Ramsar site has a wide variety of habitat types, ranging from deep channels, seagrass flats, intertidal mudflats, extensive mangrove thickets and saltmarsh vegetation. The white mangrove communities within Western Port are the most well-developed and extensive in Victoria, and are the only large communities situated so far from the Equator. Threatened plant species that are found within the Ramsar site include dense leek-orchid, creeping rush, and tiny arrow grass.

Western Port is one of the three most important areas for waders in Victoria and the site supports numerous migratory species listed under international migratory bird conservation agreements. High numbers of eastern curlew, whimbrel, bar-tailed godwit, grey-tailed tattler, greenshank and terek sandpiper have been recorded at the site. Nationally threatened species that utilise Western Port include the orange-bellied parrot, swift parrot, helmeted honeyeater, little tern, southern right whale, and humpback whale. The site supports the globally threatened fairy tern which is listed as vulnerable on the IUCN Red List of Threatened Species.

A number of Indigenous cultural heritage sites on the shores of Western Port have been identified. Currently, Western Port is used for commercial fishing and recreational activities such as boating, swimming and fishing.